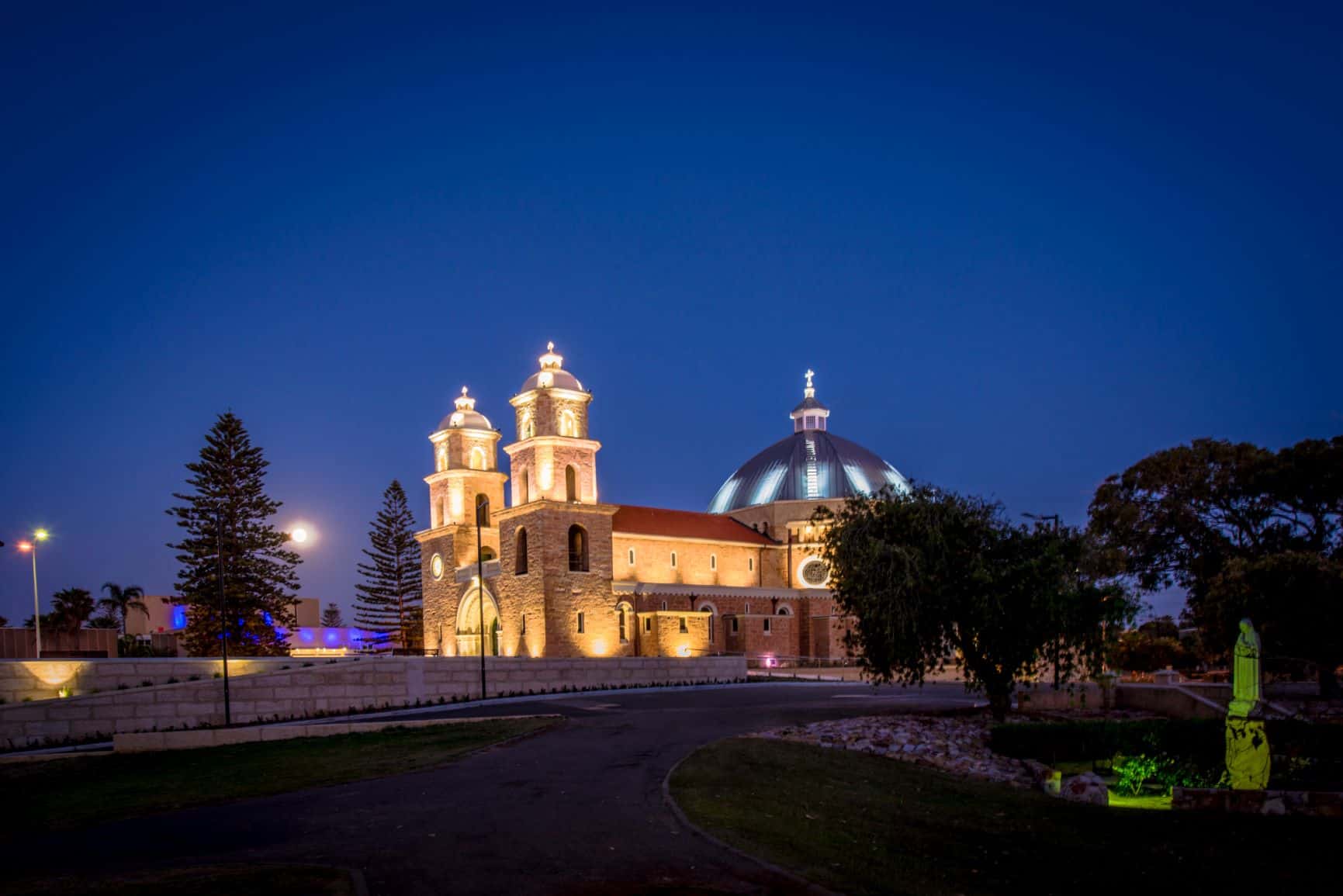 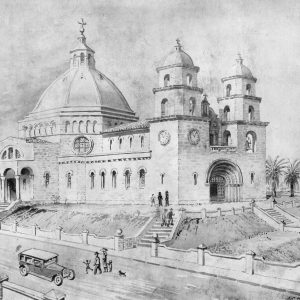 Proposed Cathedral sketched by Hawes. Note the higher dome. This was changed due to lack of funds. 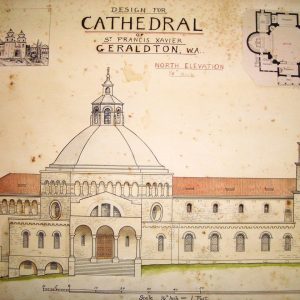 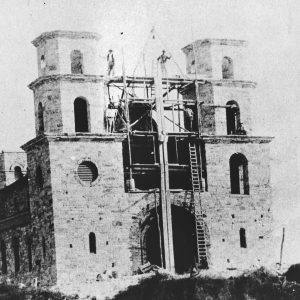 Cathedral during construction of Stage 1 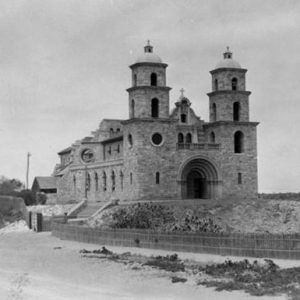 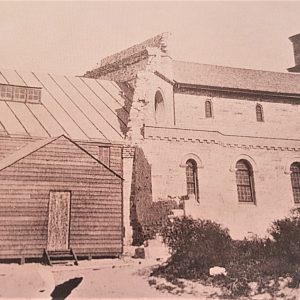 Showing temporary Sanctuary and Sacristy and First Stage of Building. 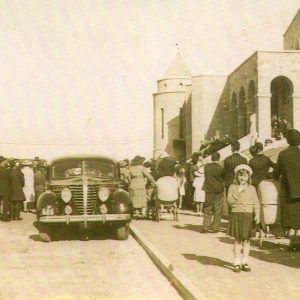 Opening of the Cathedral 1938 Photo courtesy of Albert Cream 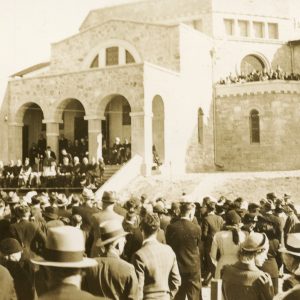 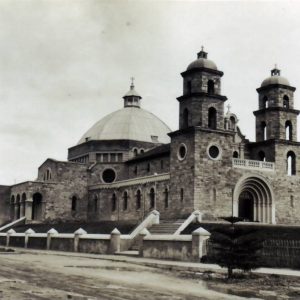 Cathedral after completion in 1938 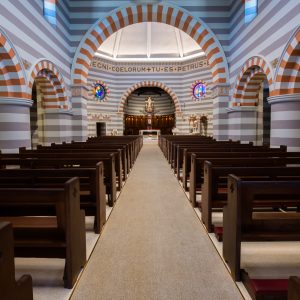 The Nave from the Front Doors 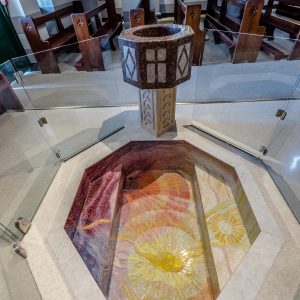 The new Baptistry with Immersion Pool. The mosaic artwork in the Pool was created by Dawn Meader of Fremantle WA. 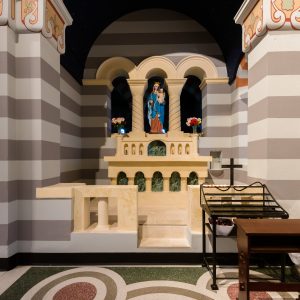 The side altar dedicated to Our Lady Help of Christians 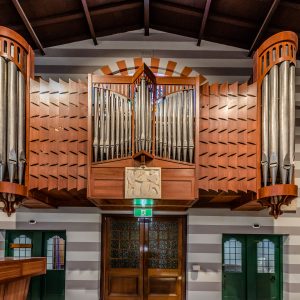 This section of the Pipe Organ, called the Cantoris Organ, is played in conjunction with the Great and Swell sections in the Organ Loft. 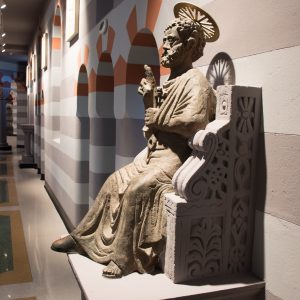 Statue of St Peter created by Hawes as a scaled down version of one in St Peter’s Basilica in Rome. 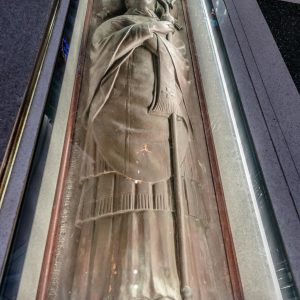 The effigy of Bishop Kelly which was commissioned by Hawes on the completion of the Cathedral. 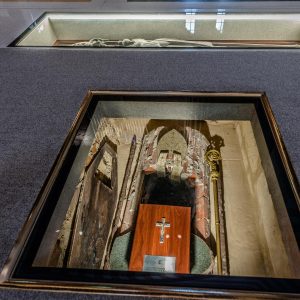 The burial place of Bishop Kelly beneath the floor of the Cathedral. 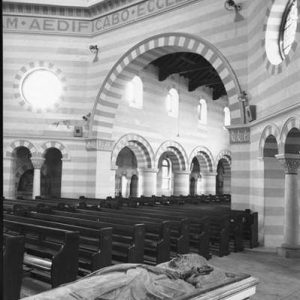 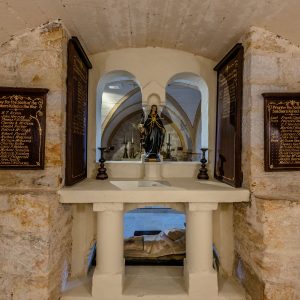 Our lady of Sorrow Altar in the Crypt 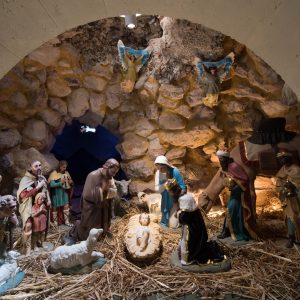 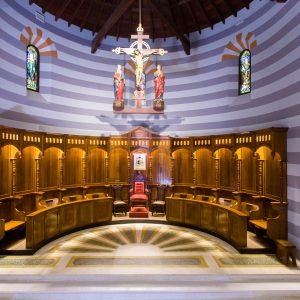 Take a Virtual Tour of the Building

Tours of the Cathedral  are conducted 4 times a week.  Check here for details.

Geraldton’s first Bishop William Kelly  met the London-trained architect/seminarian John Cyril Hawes in Rome in 1913 and invited him to come to Western Australia and design a Cathedral for his  newly formed diocese.

Fr Hawes arrived in WA during 1915, and by March 1916 began preparations for building St Francis Xavier Cathedral. Hawes was responsible for the design and construction, and also assisted Bishop Kelly to raise the funds required to pay for the mother church of the diocese. Kelly had already purchased the site and work began on the foundations of the western part of the cathedral in June 1916. The bishop had firm ideas about what a cathedral should be: “... To my mind a cathedral ought to be of such moderate size as to enable every member of the congregation to hear the preacher without effort, and to follow the worship and the functions proper to the various seasons of the year with an ease which gives a sense of personal participation in them.”

The Diocese had not raised enough money to fund the building envisaged by Hawes so he planned to build the nave, narthex and twin west towers first, with a temporary timber and iron annex at the eastern end to serve as a sanctuary and sacristy. Throughout 1917 and 1918 building progressed steadily, as did the fund raising. The stone for the walls of the cathedral was sourced from a quarry in the Chapman Valley, near the Nolba siding, on a railway line that ran north-east from Geraldton to Yuna.

On Sunday 18 August 1918 the Archbishop of Perth gave the sermon at the opening of the new St Francis Xavier Cathedral. There was much excitement and people came from hundreds of miles around to be at the opening, but the reality was that the cathedral was quite unfinished and it was to remain this way for the next eight years. In 1921 Bishop Kelly died and when the new bishop, Bishop Richard Ryan, saw the unfinished cathedral in late 1923, he considered it peculiar and refused to spend any further money on completing it. It was not until Bishop Ryan left in 1926  that Hawes was able to resume work on the cathedral, completing the Crypt Chapel of Our Lady of Sorrows and commencing the sanctuary above the crypt. He designed the crypt to be a memorial for soldiers who had lost their lives in the First World War. The Presentation Sisters’ Chapel on the south side of the sanctuary was commenced in 1927, and the second stage of the cathedral was opened in December 1928. In June 1930 the newly appointed Bishop of Geraldton, James Patrick O’Collins, arrived to take over the Diocese.  Due to the financial constraints of the  Depression years and the need for churches in other parts of the  diocese, it was not until the mid-1930s however  that he began to consider the next stage of work for the cathedral. The final stage of the building was begun in August 1937. The walls of the south transept and the octagonal drum were finished, and the north transept was built. Hawes made changes to the sacristy to make it larger on two levels and stylistically different to the rest of the cathedral.

The grand opening of St Francis Xavier Cathedral took place on Sunday 28 August 1938, twenty-five years after the initial designs were produced. The celebratory program extended over four days and the official opening ceremony was attended by both the Archbishop of Perth and the Premier of Western Australia.

Even at this time, the economic austerity of the 1930s had by necessity forced the usage of some lesser materials, and the dome and roofing of the cathedral were finally completed to Hawes’ initial specifications as part of the SFX Cathedral Precinct Project undertaken between 2015 - 17.  This project also saw the installation of the clock in the clock tower which had been proposed in the original plans but omitted due to lack of funds.

A landmark building of international importance, the story of this fabulous twentieth century cathedral has been published world-wide in a book listing 83 magnificent cathedrals from around the world. A source of great pride to the Mid-West, the cathedral also has inherent aesthetic value for the wider community, evidenced by being a much visited place commonly regarded as beautiful and engaging. It demonstrates its historic value to the community through its propensity to contribute to the appreciation of, and to teach of Monsignor Hawes’ life, and his international architectural and liturgical works; and illustrates the historic theme of development.

The Crypt beneath The Cathedral 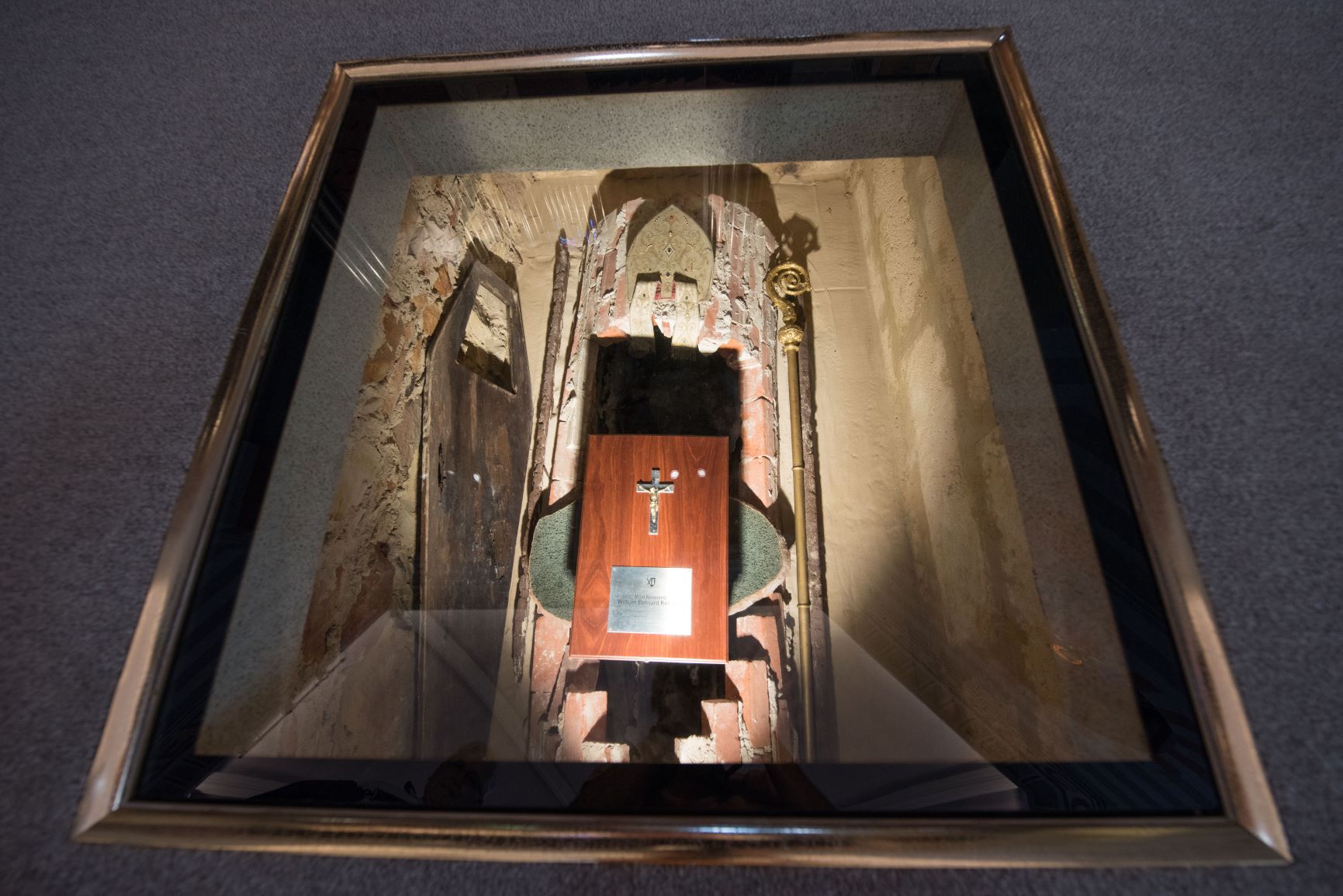 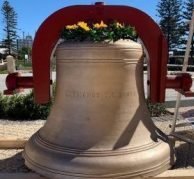 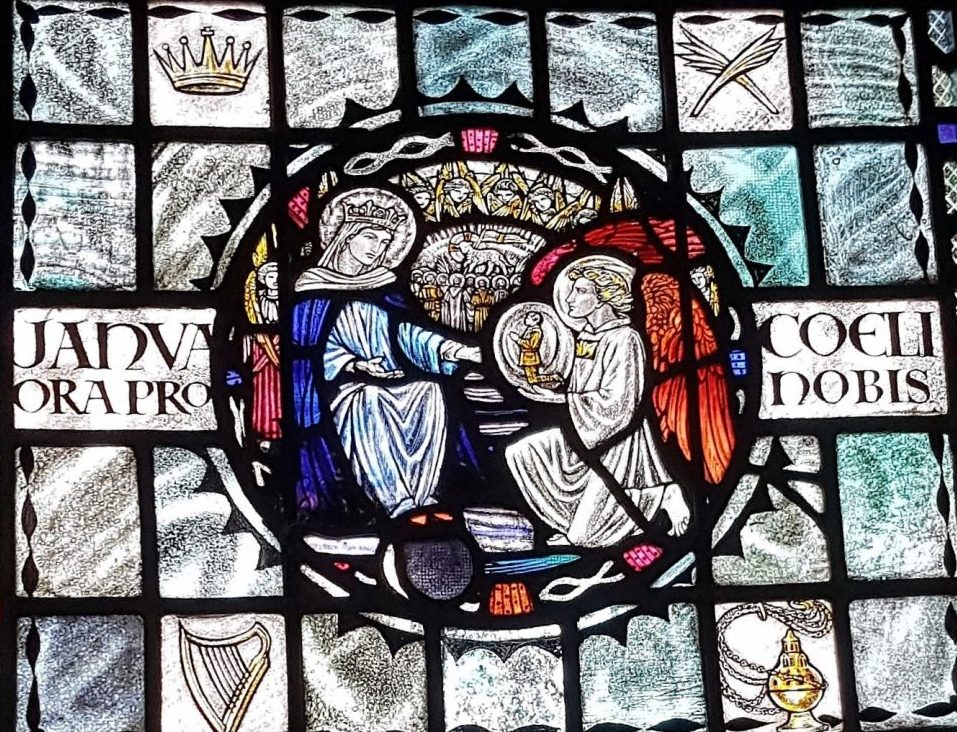 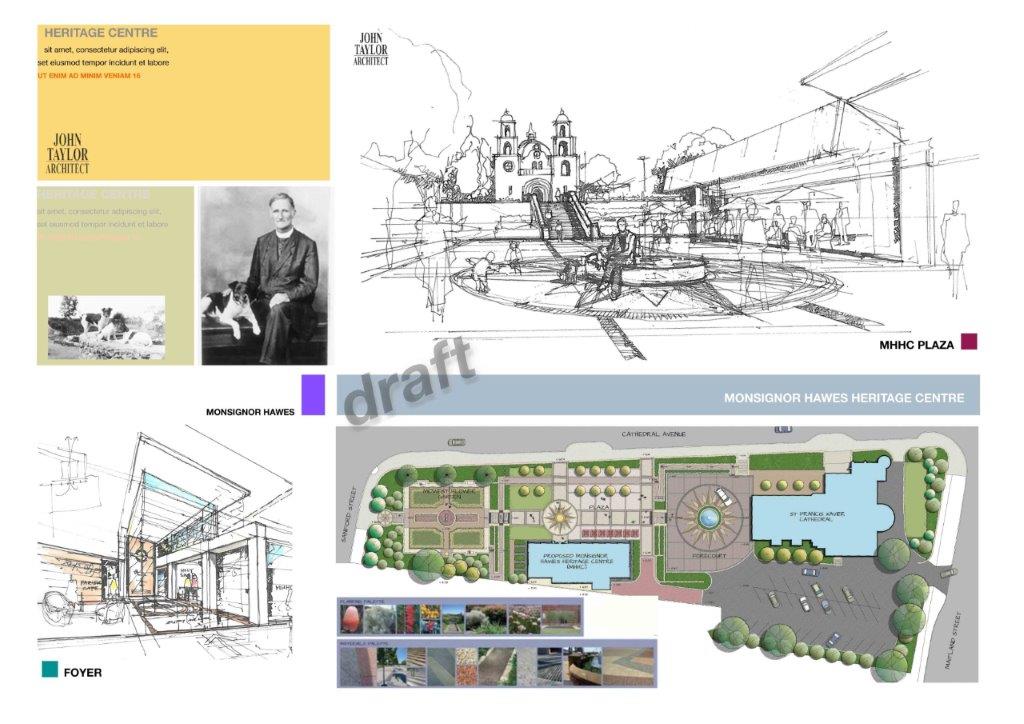