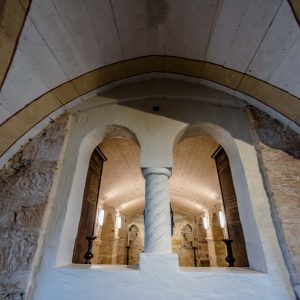 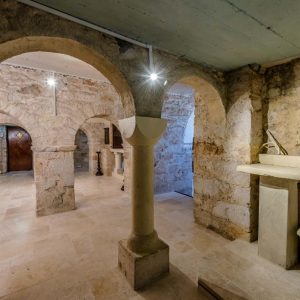 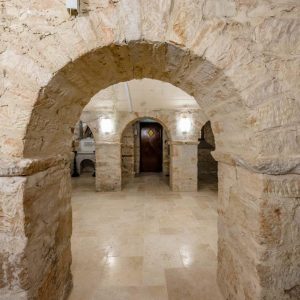 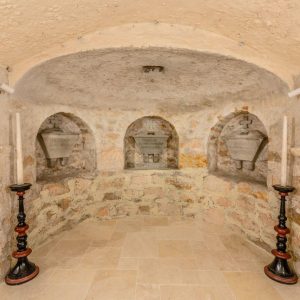 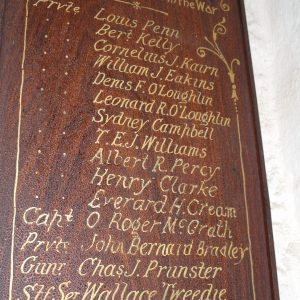 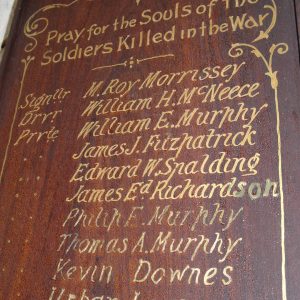 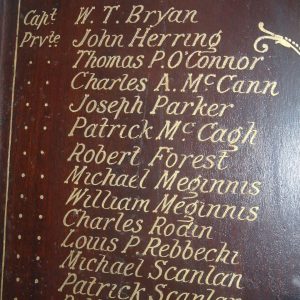 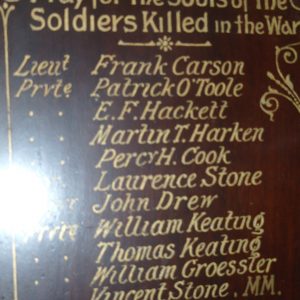 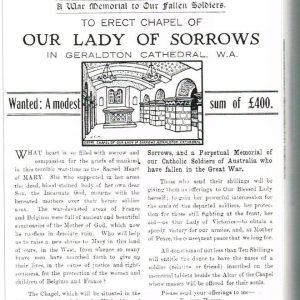 The early Christian churches had crypts excavated below the High Altar where they kept for veneration any precious relics that were brought back from Rome by the missionaries. This tradition was carried on in the cathedrals and churches of the Middle Ages.
The crypt in St Francis Xavier Cathedral contains

a)  A relic of the Crib – a piece of the manger in which the Infant Jesus was placed.  The main boards are kept in Rome.

The First World War had taken a toll on the Geraldton Community with the loss of many servicemen, so in a plea for funds to build the crypt in St Francis Xavier Cathedral, which was estimated to cost £400,  John Hawes wrote the following:-

The Chapel, which will be situated in the subterranean crypt below the High Altar of the New Cathedral, will be A Special Votive Offering in reparation to our Lady of Sorrows, and Perpetual Memorial of our Catholic Soldiers of Australia who have fallen in the Great War.

Donors of Ten Shillings or more were entitled to have the name of a soldier inscribed on the memorial tablets beside the Altar of the Chapel.  There are Four Honour Boards in the chapel with the names of 57 fallen soldiers whose family members paid the ten shillings  to have their names inscribed.

The statue of Our Lady of Sorrows bears a raised heart pierced by 7 arrows representing the 7 major sorrowful events in her life. In some places she is called Mary of the Seven Swords.

The chapel of Michael of the Archangel contains a reliquary with relics of the Saints and a new stained glass window donated by the Cathedral Tour Guides.

Behind the main altar is the Chapel of St Joseph.  The window represents Christ as the triumphant Lamb mentioned in the Apocalypse.  “Worthy is the Lamb who was slain to receive power and wealth and wisdom and might and honour and glory and blessing”  Rev. 5:12

The ceiling in the crypt looks like painted wood but is in fact cement and the work is called 'Off Form Concreting'.  To make this curved concrete ceiling would have been difficult and this work is rarely seen.