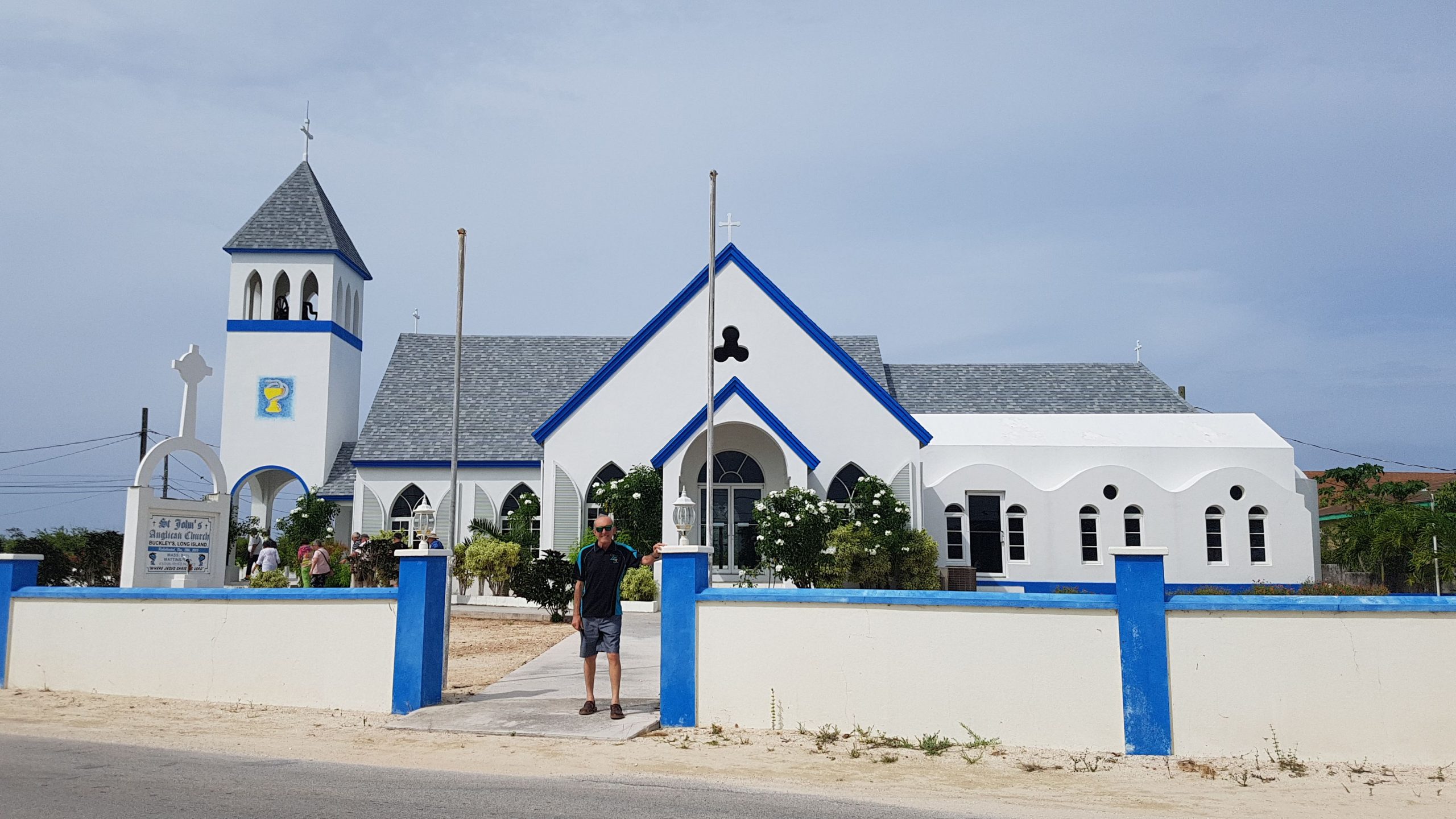 Bishop Justin outside St John the Evangelist at Deadman's Cay 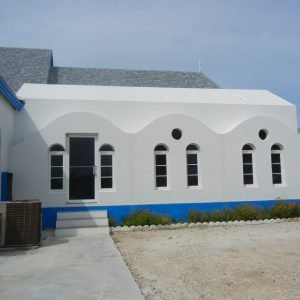 The added side chapel at St John the Evangelist with its ‘rock roof’. 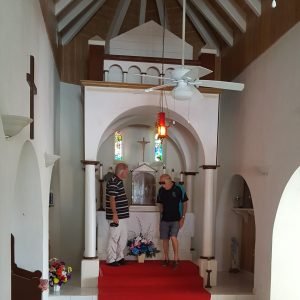 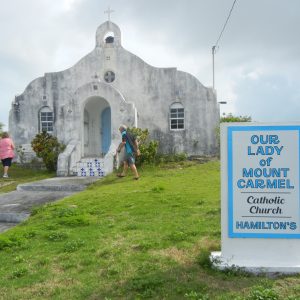 The original Our Lady of Mt Carmel 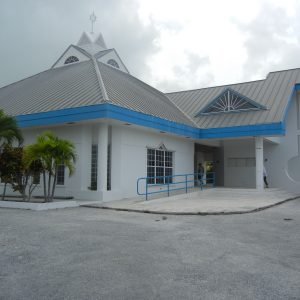 The newly constructed Our Lady of Mt Carmel Anglican Church 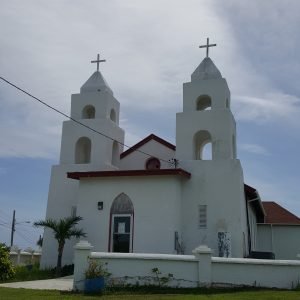 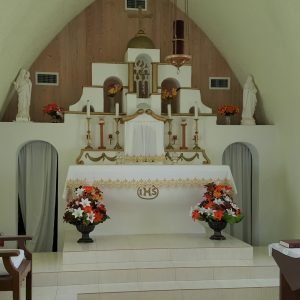 The altar in St Paul’s – very like OLMC Mullewa WA. 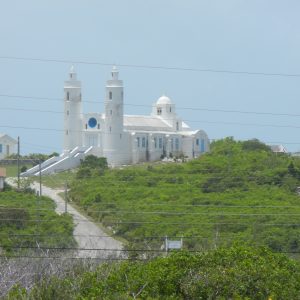 Church of Sts Peter and Paul 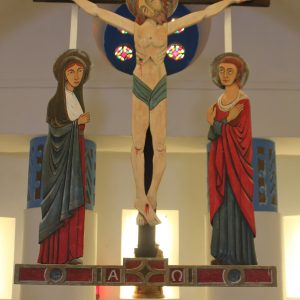 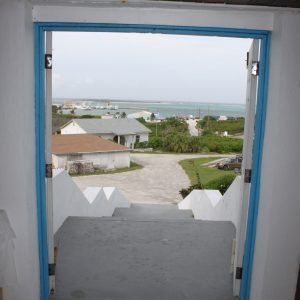 View from Sts Peter and Paul 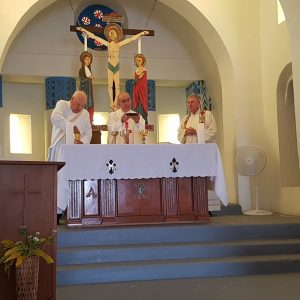 Bishop Justin celebrating Mass on the 26th anniversary of being ordained a Bishop. 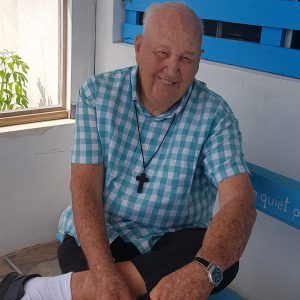 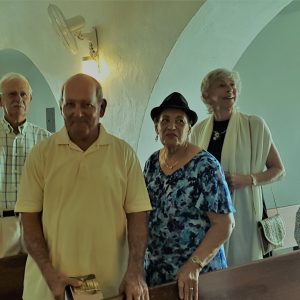 Parishioners in Sts Peter and Paul 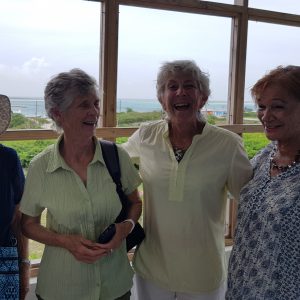 Pilgrims Barb and Jenna with locals Martha and Barbara 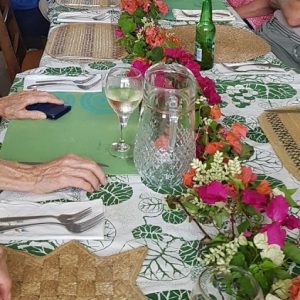 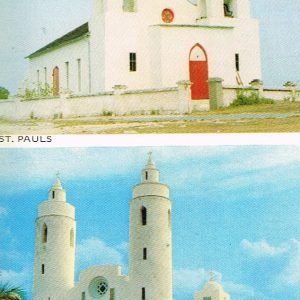 Hawes' s work on Long Island occurred in two stages many years apart.   His first visit was in 1910  in response to an invitation from his friend, the Anglican  Bishop Hornsby, to administer to the Anglicans on the island and  to assist with the  the re-building  of church buildings after a hurricane in 1908 had left a trail of destruction.  He left in 1911 to become a Catholic.

Fra Jerome returned as a Catholic priest  in 1939  at the request of the Bishop of Nassau,  who asked him to assess the Catholic buildings on the island. He was welcomed by  the many friends he had made during his time there earlier.

The Pilgrims first port of call was to St John the Evangelist Anglican Church which Hawes had almost completely rebuilt in 1909 and where he had tested his design of a 'rock roof',  which he believed would withstand further hurricanes, on the newly added Lady Chapel.  He also added a baldachino over the the High Altar. This church was still in use and  in very good condition.

Another Anglican church that wasn't in such good condition when the Pilgrims visited was  Our Lady of Mt Carmel Church in Hamiltons  which had not been designed by Hawes but to which he had contributed £200.  It  was built in 1938 and Hawes was pleased with what he saw on his return in 1939  and believed that the architect, Albert Lothian, had used his (Hawes's)  ideas of stone roofs for the design of the church.   The original church has been replaced by a new, modern church next door.

Hawes' main work for the Anglican church in 1909 on the island was the Church of St Paul in Clarence Town.  The Pilgrims were indebted to their host on Long Island, Deacon Patrick Darville, for arranging for them to be able to visit  St Paul's.  They were struck by the resemblance of the altar to that in our Our Lady of Mt Carmel in Mullewa , Western Australia.

On his return to the Bahamas in 1939 Hawes wasn't posted to Long Island but had been asked to design a hurricane-proof Catholic  church to seat 200 people in Clarence Town - close to his original Anglican Church of St Paul's.   The Pilgrims were able to participate in  a Mass in the Catholic Church of Sts Peter and Paul on the occasion of the 26th anniversary of Bishop Justin becoming a Bishop, and to see first hand the  holy rood  produced by Hawes that they had  read about.

The local parishioners joined the group for Mass and then provided wonderful hospitality  in the Parish Centre next to the church.

Back to 'In the Footsteps of John Cyril Hawes'