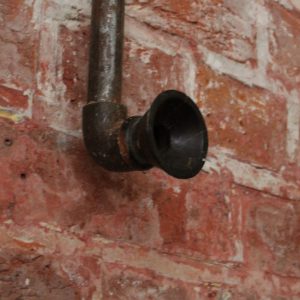 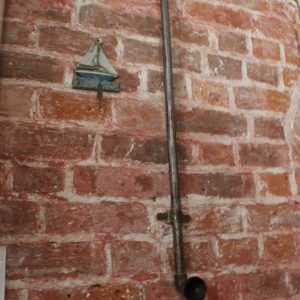 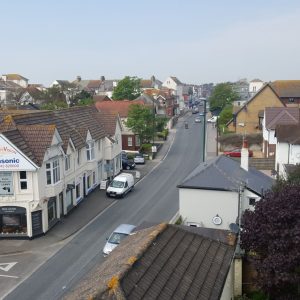 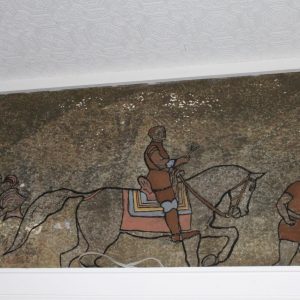 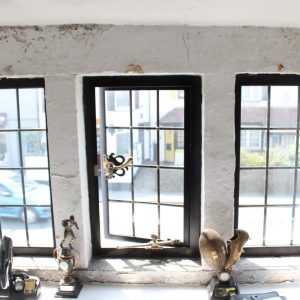 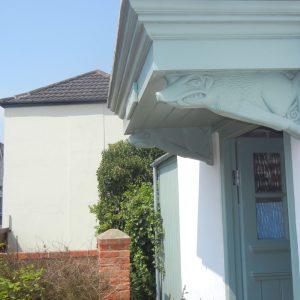 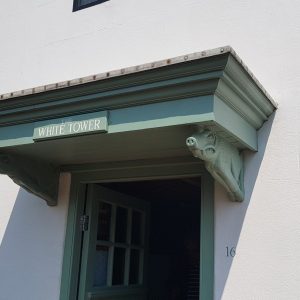 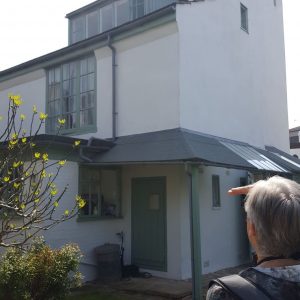 The White Tower from the back.

The White Tower located in Aldwick Road, Bognor Regis is among the earliest of John Cyril Hawes’ buildings, built in 1898, and was built as a holiday house for the three Hawes boys. Several other buildings were designed by Hawes in Bognor Regis and built by a local builder named Harfield. Apparently Harfield withdrew as the builder of the White Tower due to John continually modifying the design.

Wanting to obtain sea views blocked by houses on the seaward side of the Aldwick Street, John Hawes set upon the idea of “ . . . instead of a long spread out cottage I would stand it up on end – as a tower”. (Diary p.25)

This he did, with four rooms atop each other accessed by a side turret staircase with a viewing parapet on top of the building. At the rear is a two storey wing containing larger rooms and a studio.

There are hall mark Hawesian and Arts and Crafts features to the building such as the narrow slit lead light windows, a narrow church steeple- like staircase, exposed beams and unfaced bricks above wooden dado panelling. One can also see Hawes sculptural prowess in the  lintel over the front entry door.

On the inside face of this same lintel can be found the Latin inscription, “Me triplicem Edvardo curat fratrique Roebrto ac sibi Johannes aedificare domum 1898”, which translates to, “John caused this house to be built as a triple home for Edward, Robert, and himself, in 1898.”

In the loungeroom can be seen over-mantel murals which were reported to have been painted by Hawes and his brother Edward.

Shortly after it was completed, an artist and leading architectural correspondent Raffles Davidson, wrote the following in The British Architect.

Mr John Hawes is the architect of this cleverly quaint little house; a sort of building which, in its optimistic quality and simplicity, might be emulated in thousands all over the kingdom.

That wasn’t to be however the White Tower is still regarded as a quaint and interesting building today. The home is privately owned and is being lovingly restored by its owners.   A group of pilgrims from Western Australia  visited the tower in May 2018 and a plaque, signifying the importance of the building, was unveiled by Mrs Patricia Mills from Geraldton who was baptised by Monsignor Hawes, and Bishop Justin Bianchini, Emeritus Bishop of Geraldton.  Click here to see more details of the Pilgrims' visit.