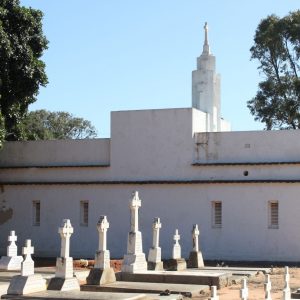 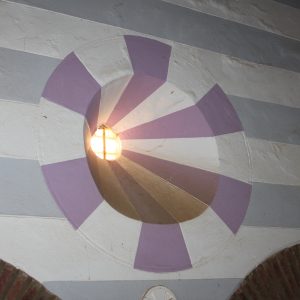 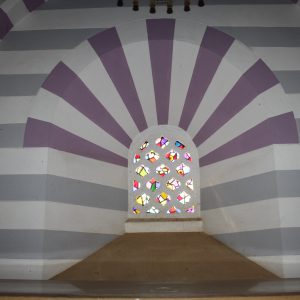 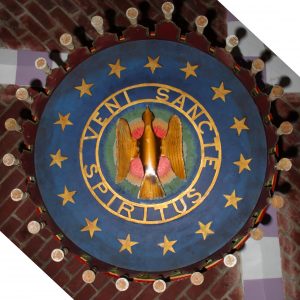 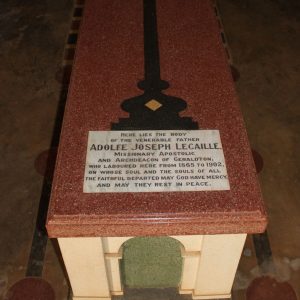 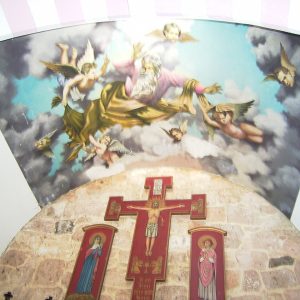 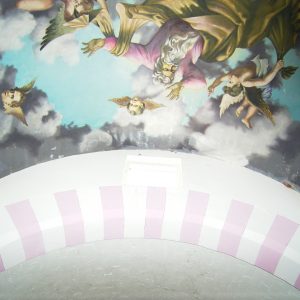 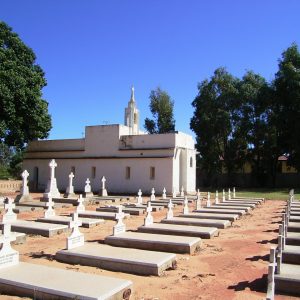 Graves of Bishops and Priests beside San Spirito Utakarra 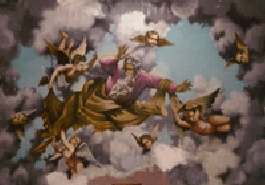 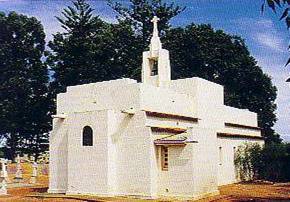 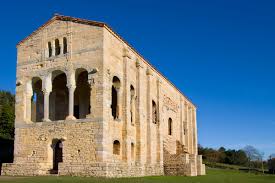 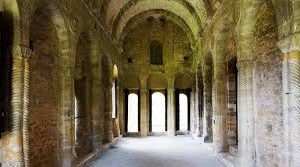 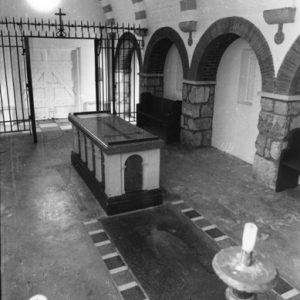 The chapel is situated at 130 Edward Rd Geraldton.  You can visit the Chapel anytime and view the architecture through metal gates on the entry porch.   Mass is celebrated here once a month.  Contact Bishop’s House for details (99 213221).

It is possible to arrange to tour the building ($5 per person) by visiting the Monsignor Hawes Heritage Centre at 56 Cathedral Ave Geraldton or by phoning the Tours Coordinator Gerry (0417 912997).

In Geraldton Cemetery at Utakarra there is a remarkable and surprising little chapel – the Chapel of San Spirito.  Its plain white walls, colourful interior, and the silence, invite us to imagine the lives of those buried here.  There are two graves, on which these names are inscribed … Archdeacon Adolphe Joseph Lecaille and Reverend Dean John Hawes – but only Lecaille’s date of death is engraved – the 7th May 1908.

Before Bishop Kelly arrived, Geraldton in Western Australia had seen very few Catholic priests.  The Belgian-born missionary Adolphe Joseph Lecaille, later Archdeacon Lecaille, was one of them.  Under very primitive conditions, Lecaille designed and built seven churches in the Diocese in the late 1860’s and 70’s, including the first churches at Greenough and Northampton, and the first St Francis Xavier Church in Geraldton. Over this period of ten years, Lecaille also travelled on horseback from town to town to say Mass – paving the way for John Hawes’s own journeys  many decades later,

John Hawes greatly admired Lecaille’s devotion to the people of the Geraldton diocese and, in 1935, decided to honour the memory of this remarkable pioneer priest by building a chapel  and tomb at this cemetery.

The Chapel of San Spirito was perhaps the project closest to John Hawes’ heart. It was Hawes who secretly donated money to the diocese to build the chapel out of respect for his predecessor, and it was also he who donated his services and artwork.  In return, he was allowed to design the Chapel as he wanted.

Construction of  the Chapel by Berry Bros  costing £824, began in April 1936 and was completed three months later. Hawes designed the Chapel and painted the magnificent interior triptych (or three-part mural) both of which were inspired by a ninth-century Spanish church, St Maria del Narancio in northern Spain.  The exterior of the Church  is modernist in style, reflecting the influence of the 1930’s Modern movement on Hawes’ work. The barrel-vaulted ceiling in the nave, the Rood triptych and subtle lighting of the Chapel all make a beautiful composition. Hawes said later that the Chapel was the best architectural work he had ever done. Bishop O’Collins presided over the private blessing and opening of the Chapel on 29th August 1936 however there was no public function, the public entombment of Archdeacon Lecaille took place the following day with an impressive public ceremony at Utakarra Cemetery and the Chapel was consecrated two years later on the 6th December 1938, with Lecaille’s sarcophagus  placed in the centre of the Nave.

The second grave at the Chapel is engraved with the following words : “Pray for the soul of the Reverend John Hawes, dean of the Parish of Mullewa, architect of Geraldton Cathedral, and builder of this and other churches”.

But Hawes is buried in his beloved Bahamas.  Even as this engraving was being done, he knew in his heart that he would die elsewhere.  According to his biographer, Tony Evans, this empty grave is not a sign of Hawes’ self-importance, but instead a symbol of the fact that he prepared for death throughout his life.

The painted biblical scene on the ceiling of the nave was painted by artist Dan Mazotti around 1953 or 1954. He approached Bishop Gummer (O’Collins successor) describing himself as a migrant artist fresh off the boat from Italy. He was shown the Chapel and proceeded to  paint the scene we now see.

The money donated by Hawes for this building also provided an endowment for Mass to be said in the chapel every month for the Holy Souls.