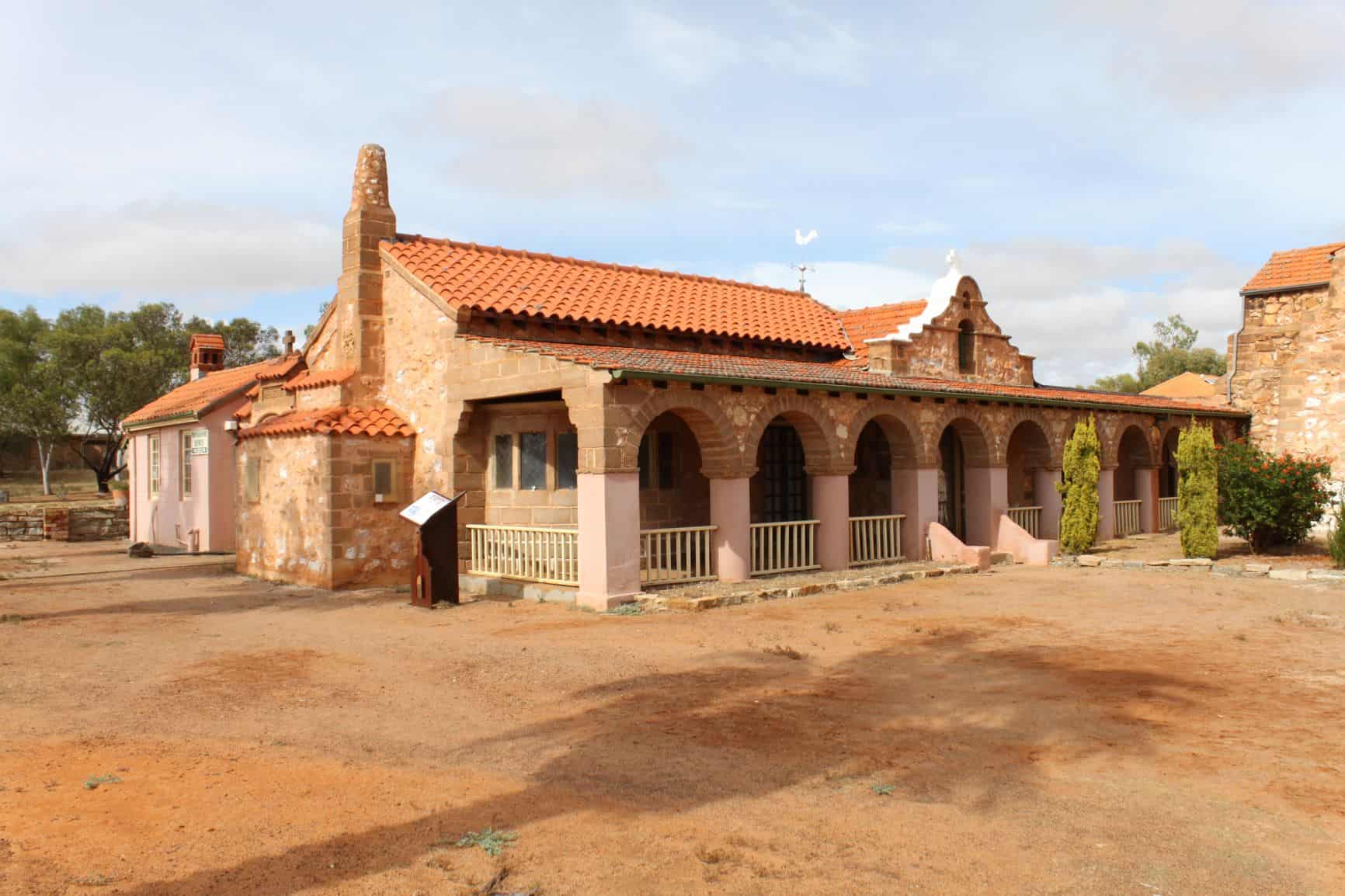 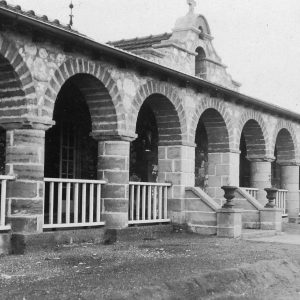 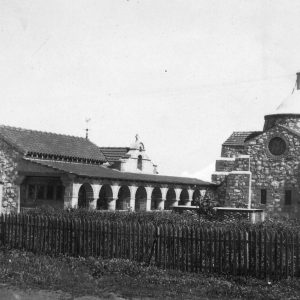 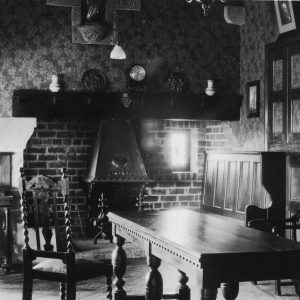 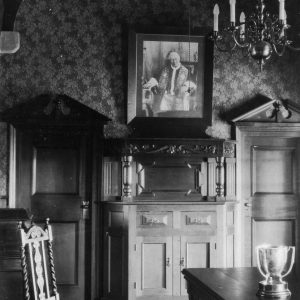 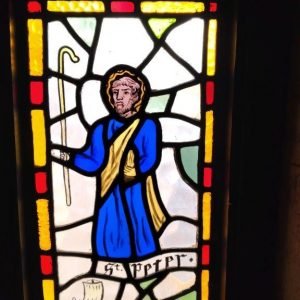 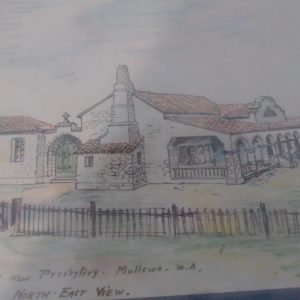 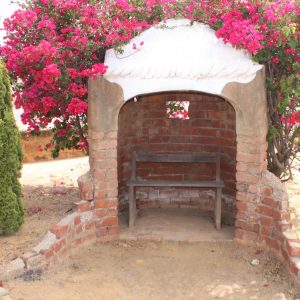 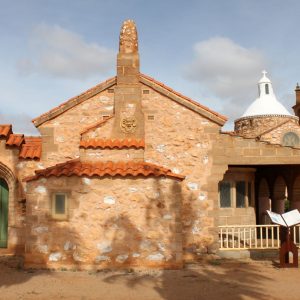 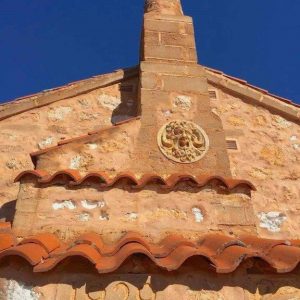 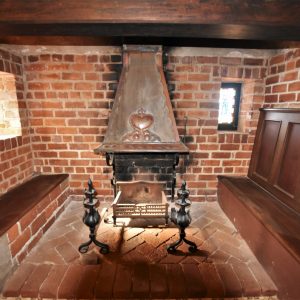 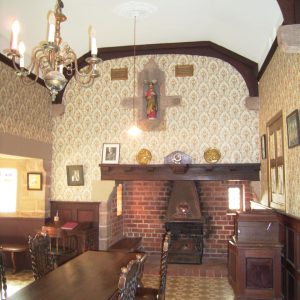 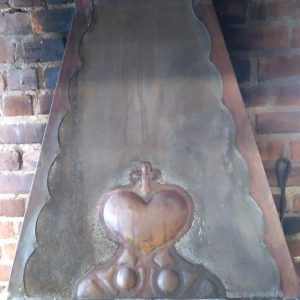 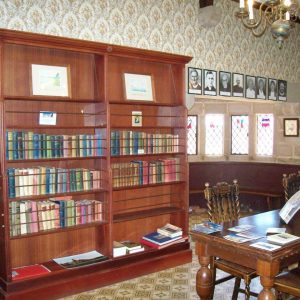 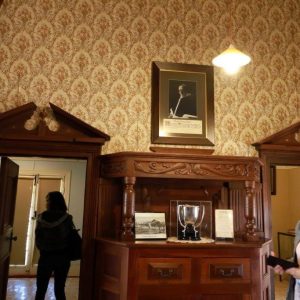 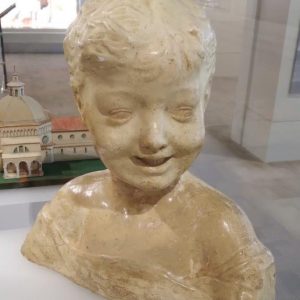 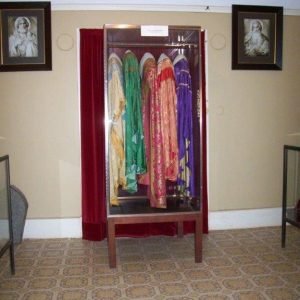 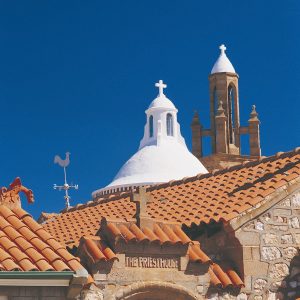 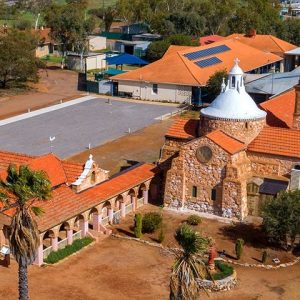 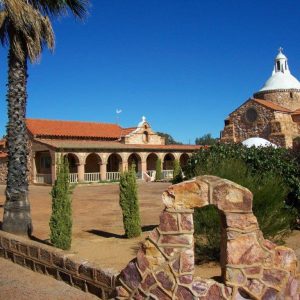 View of Priesthouse and Church 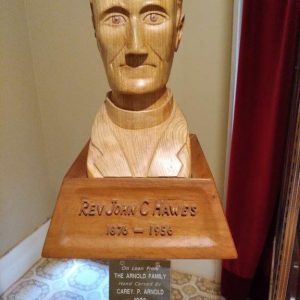 During Fr Hawes tenure in Mullewa and once he had completed his Church of Our Lady of Mt Carmel, he set about planning for his own accommodation. In 1927 he commenced plans with the encouragement of his parishioners and Archbishop Clune of Perth , who wished for him to have improved living conditions.  All the time he was building the church he was living in what was described as a one room 'shanty'.

By late 1930 the building was completed ready for use as a presbytery. Hawes spent most of  his last 9 years in Western Australia living here.

The building is a low cottage style with red Cordoba tiles, built from the same quarried stone as the church.

When entering through the large green door to the east of the building one can read the inscription in Latin  ‘Janus Patet Cor Magis’ which means ‘The door opens wide but my heart more so’.  As one walks through the building it has a warm cosy feel with a typically English style.

The main living room has an ingle nook fireplace, a large latticed bow window with a box seat,  and  the cement floors are covered with linoleum throughout.

The house is furnished with heavy dark timber typical of the time which was designed by Hawes and made by a Perth craftsman.  The walls are panelled to half height.

In 1986, during Hawes’s time as a student at the Arts and Crafts School, he won a prize for his plaster model of Donatello’s ‘Laughing Boy’.  This can be seen on the a shelf in the living area.  Also in the living area, situated on the large sideboard, is the silver cup which was presented to Hawes after he won a Yalgoo horse race on his horse ’Babs’.

During the 1970’s the priest house was no longer required as a presbytery and the Parish Council decided to set up the building as a Museum to Monsignor Hawes and his works.

The traveller will find many photographs, art works, books, vestments and items used by Hawes during his time in Mullewa.

Listen to the Audio of Hawes' times of conflict.

The Museum is located on the Cnr of Bowes and Doney Streets Mullewa.

The Museum and Church are open daily from  July to October.

The Mullewa Church and Priesthouse is open daily from  July  - October, however volunteer numbers are dwindling, and any help  would be appreciated   from outside sources. Volunteers would be required to open up the church and museum by 10:30 a.m. and welcome visitors. There's an audio guide available so there's no need to be too knowledgeable. Their advertised opening hours are usually 10:30 - 12:30 but this can be extended according to the availability of the volunteers.   There's a caravan park in Mullewa for those who would like to spend a few days/weeks  in the town.