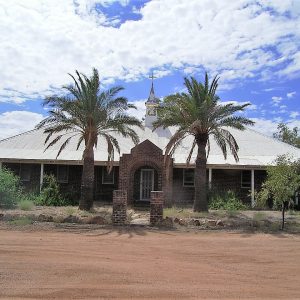 Hawes drew plans for a Pallottine Monastery at Tardun in 1937. The Pallottine order had come to Australia in 1900 and Bishop Kelly had introduced them to the Kimberleys to work amongst the natives. They had opened the mission in Tardun in 1927 and it was hoped that it would become a novitiate for lay brothers.

Hawes designed a brick bungalow-style building with an 8 foot wide verandah extending all the way round it with all the rooms grouped around a corridor which ran east-west.  The front entrance was similar to that in many of Hawes’s other buildings including the Mullewa priest house and the Geraldton Cathedral.

Pallottine Mission is now privately owned and not open to the public.