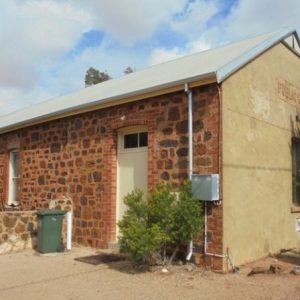 In 1938 Hawes was very happy to be relieved of his duties as Parish Priest in Mullewa and was transferred to the Parish of Greenough which had been without a resident priest for 12 years.  As well as the Gothic Style Church of St Peter in the village of Greenough,  Hawes also  travelled to the nearby churches of  St John's in Bootenal and St Thomas'  in Bradleys to say Mass.  These two churches were only 6 miles apart.  In the nearby larger railway settlement of Walkaway, Mass was celebrated in the Town Hall, so Hawes set about designing a church for the Walkaway congregation.

The original design which would have seated 80 people was dated May 1938.  In 1939 this  was enlarged and upgraded to seat 200  and included a Nun's Tribune and Choir Gallery.

Like many of Hawes' designs of this time, the Modernist Church was never built.  This was probably partly due to the fact that Hawes  left Geraldton in 1939 and never returned and  that he was  the driving force behind the scheme.  The fact that  this was during the 2nd World War, coupled with the fact that modern transportation meant that people could travel more easily to nearby parishes, may have also contributed to the abandonment of the the plan.  He didn't however give up hope of it becoming a reality.  In 1940 he sent  Bishop O'Collins a donation of £200  which he had previously offered for the building of the Devil's Creek Church (never built) and asked that the Walkaway church  be named 'The Holy Redeemer'.  He also asked that the Stations of the Cross that had been in the Cathedral prior to his sending new ones from England,  be placed in the Walkaway Church. Further research is needed to discover the fate of the £200  donation and the oil painted Stations of the Cross of which he was very fond.  In a letter to Bishop O'Collins in 1940 Hawes  explains that he was with Bishop Kelly when he purchased them in a little dark 'fall-down-the-steps' cellar of a second-hand shop by the Tiber opposite Castel St Angelo and while others might consider them dark, dirty and obscure, to him they were real  'Rembrandts'.